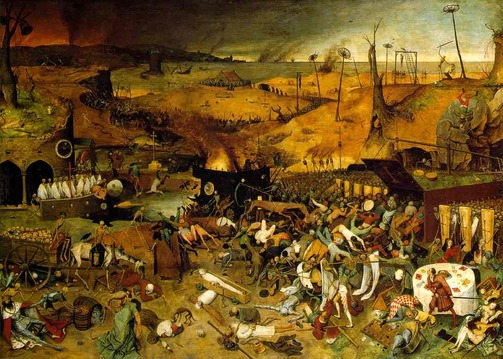 At the time of the plague many people believed that God had sent it as punishment for the people’s sins. People turned to the Catholic Church for protection and often persecuted and blamed Jews for the plague. At this same time  the “100 Years War” had begun between France and England.

The Black Plague was believed to be spread by oriental rat fleas that would survive on the blood of black rats. These rats lived on the ships of merchants where they were transported over 6,000 kms into the heart of Europe. The Bacteria that caused Bubonic Plague was transmitted by fleabite.

Also called the Bubonic Plague, the death was characterised by large dark swellings know as buboes. The name Black Death is used to describe the devastating effect the disease had on society.

The Black Plague started in Central Asia around China in the 1320’s. When it reached Crimea it travelled along the Silk Road into Europe and around the Mediterranean region. The Black plague arrived in Europe in 1347. It was first recorded in Sicily and Venice and by 1348 it had spread quickly throughout all of Italy, France and Spain. By 1349 the plague had spread into  western Europe in Germany and was moving quickly into central Europe. In 1350 the plague reached Eastern Europe and in 1351-53 had swept through Russia. Over the next few years the plague passed over Europe and the First Wave was ended. There were two more outbreaks in the 1600s and the 1800s.

It is estimated that up to 60% of Europe’s people were killed by the plague. By the time the disease had swept through Europe the world’s population had been reduced from 450 million to 350 million. Egypt’s population had declined by 40%, Paris’ by 50% and at least 60% of modern day Germany’s population. The Black plague killed one in three people in Medieval England during the 14th century
Europe’s population took 150 years to fully recover after the plague.


The Church and the Plague
Before the plague the people lived their lives how the Catholic Church told them. The Church had always told the people what was right and wrong and gave the them direction. When the plague began people believed it was punishment from God. Priests and Bishops lost their credibility because they could not explain the plague or offer a cure. As a result the people began to stray from the Church and question it’s teachings. The Church lost tens of thousands of members from the plague as well as the large number who lost faith in it's authority.

Priest and Clergy reputation declined as many people saw that the priests were just ordinary men. They were dying when caring for the sick, refusing to come in to contact with some and abandoning their posts in fear. As a result new priests were being put in their positions who were not educated and so the Church’s teachings weakened. Some clergy took advantage of these tough times and charged people for ordinary services. Many people left their wealth and belongings to the Church so it became very wealthy. While people were suffering from the effects of plague many people turned away from the church as it could not offer them help in the crisis.